What the hell is a Salmonax?

are the vigilante quip-cracking duo who keep the neighborhood in one piece in their own charmingly unethical ways. They are the backbone of Straight and Narrow St's mayhem quota, Hell's soul vault philanthropics, fiction's "most enduring couple," and especially New York City's , ran by two of the bestest of partners!

Sam is the first half of the duo, being a (horizontally challenged) tall, well-dressed, brown, anthropomorphic, dog who often takes charge of the phone calls, takes charge of the cases he's employed, and takes care of his little lagomorphic bunny buddy named Max, who also tags along the investigation.

Max is the last half whose lighthearted slapstick violence the team's image is based on. He's a 3'0 tall brown-soled white lagomorph with snaggy teeth and always carries a hearty violent tendency on his person and arsenal. Where he stores them is none of your damn business though. Without him, the Freelance Police wouldn't have their signature hilarity, pummeling, and maybe both combined.

These two have been through many mediums & age ratings together, but have so little content having starred in a TV series for Fox's kiddie network, their more popularly known adventure games by Telltale/Skunkape & Lucasarts, and the comic series they first debut. 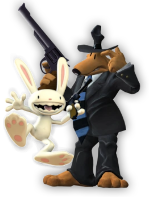 A strong beginning for the tales of our comically brutal neighborhood watch. About 0.5% plot, 23% revolver slinging, 65% power of friendship, 9.5% orange marshmellow circus peanuts, and 2% miscellaneous corndog meat. The cool thing about reading these comics is that you can even see the progression of Steve Purcell's style over time. It's pretty hard to get your hands on these, but I hope someday I have enough pocket change for a scanner and any of the physical books. And I call myself a fan!

LucasArts teamed up with Purcell to develop a computer game (1993) available for DOS and Mac to tell the tale about the Freelance Police and their nationwide search for a missing Bigfoot. The team has to track down the perp through the help of tourist traps, a bundle of soggy Sasquatch locks, and the offensively rank scent of justice. They may even need to save an entire race of Bigfoots in the process! That was not mentioned in the contract.

Not going to lie, I had a tough time navigating the game. Not because of its own merits though, but because I'm sort of incompetent at these kinds of games anyway and Hit The Road is my "baby's first" point-and-click. I digress. It's a really funny game and I didn't mind sticking around a dead-end for too long if it meant I got to hear every silly item description and non sequitur Sam had to say. I also love how the plotline is just completely stupid and unpredictable.

The Short-lived TV series and Other Animated Pieces

The TV series on Fox Children's Network was and is somewhat criticized for censorship, but you have to hand it to them for being able to get away with as many jokes as they did on TV, let alone children's TV. Because the show was marketed for children but committed to the original teen's demographic of raunchy and metatextual humor, the show was, well, short-lived for 24 episodes total. E-mail me if you have the DVD set.

The previous studio was shut down by the mouse in red shorts due to low output "Lucasarts shut down their adventure game division years before the Mouse bought them. The management was convinced in 2004 that the the adventure game genre was dead" (Thank Slimy!), and so Telltale was birthed by former LucasArts developers to continue the release of several properties. Sam and Max would be graced with 3 new graphic adventure additions as of 2010:

My favorite Sam voice would be Nowlin for the level-headed and totally-on-spot delivery of Sam's dry humor, but I can't get enough of Harvey Atkin for how Dad-ish he sounds. Nick Jameson isn't too bad either and I like the idea of Max having an east coast accent. For newcomers who want a taste of the series, feel free to read some highlighted quotes below for an idea of what you're getting into:

Monkeys Violating the Heavenly Temple (Surfin' The Highway)
Bartender: It's for you, McGruff!
: Did you hear what he called me? I hate that!
: Let's sneak up to his room later and drain all the liquid out of his body.
: If he calls me "Hello Kitty," I'll plug him.
Bad Day On The Moon (Surfin' The Highway)
: So let me get this straight. We can breathe here [The Moon] then?
: I guess those candy-butt astronauts didn't have the stones to try it.
: I could never say that about an astronaut.
Dysfunction of the Gods (TV series)
: Is that so? Audience, say hello to Aphrodite!

[Audience becomes a pack of wolf-whistlers]
: Classic bone structure.
: I bet she knows all the state capitals too.
Max's Big Day (TV series)
: How could I've let this happen?! Aw, Sam speak to me!
: I'm fine, knucklehead! Much like the weasel utilizes its collapsable skull to fit through near impossible spaces, I have called upon a likeability to collapse all my bones and bulky organs in order to dupe these uncultured puppies into thinking they have rolled and pressed me into this unsettling garment, yok yok yok! Neat huh?

The Big Sleep
: Dear lord, Max! We're in Britain in the 21st century! We;ve been pickled in some sort of twisted cryogenic stasis!
: You just like saying cryogenic stasis, don't you?
: Yeah, so?
---
: Anyone who doesn't want me to borrow this car please raise your hand! ... Okay then, thanks! [He says as he breaks a car window open with his elbow]
: Didn't you teach me that stealing is wrong?
: Gee, I must have left my moral compass back in that shallow grave.
Ice Station Santa (Beyond Space and Time)
: Look on the bright side!
Jimmy: No wife? No family? No job? What bright side?
: Well, with all the brain damage you got from boxing, you'd make a great vacant-eyed janitor!
Jimmy: Aww nuts. My boxing career didn't even last long enough to give me a decent case of brain damage.
Night of the Raving Dead (Beyond Space and Time)
: What gives, Sybil? Did you start your dating service again?
Sybil: Not quite. All my clients are applying for dates with me.
: Um, as kind of officers of the law, we have to point out that that's kind of illegal.
: Does that mean we can shoot her to regain health points or something?
Sybil: What? No, get your heads out of the gutter, it's not like that.

Compilation of Sam & Max being Anti-State

A pointless list I made of moments when either Sam or Max reject state agencies and profile the rich, or just take a jab at the American system for the hell of it. Ironically it has nothing to do with their "Freelance Police" business because I'm pretty sure they just abuse its name for permission to shoot things and fuck with the general public for convenience and money.

Office (Hit The Road)
: Cash. Never leave home without it.
: Yeah, we may need it to bribe slippery government officials.

Bumpusville (Hit The Road)
: It's a Conroy world after all.
: If we ever get this rich and famous, I want you to shoot me, Sam.
: It'll be a pleasure.
Situation: Comedy (Save The World)
: You know what's wrong with television today?
: There's no reality show where public officials are forced to eat bugs for their corrupt misdeeds?
: It's like you can read my mind.
The Mole, The Mob, and the Meatball (Save the World)
: What exactly is a professional trial witness?
Sybil: Oh, it's great! We give dramatic testimonies, sequester in ritzy hotels, and order room service in the name of truth and justice!
: It almost sounds like you're enriching yourself at the expense of this country's overcomplicated legal system.

Abe Lincoln Must Die! (Save the World)
: Look, Max, in the White House garden pond. It's Jimmy Two-Teeth!
: We often allow lobbyists to use the pool, Sam.
: Jimmy's a lobbyist now? What's he lobbying for? Cheese interests?
: Affordable healthcare for the aged and underprivileged, Sam. He's a lot more multi-faceted than you give him credit for.

Abe Lincoln Must Die! (Save the World)
: Well, it looks like the country is saved, at least from mass hypnosis. What do you want to do now?
: Let's abuse my powers as leader of the free world to squeeze the middle class until they're burning their own shoes for heat! 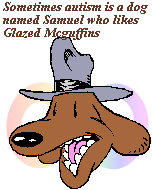 Why Samuel The Dog Is My Hero

Total shot in the dark but my verdict confidently says that Sam is autistic. If his nonconformist approach to policework isn't enough, I've made a list of telltales to uphold my canon:

Reading and watching Sam live his happiest and best years with Max makes me feel at home with my autism seeing as most of these list items are based off of things I relate to. I can't help but see myself in Sam and feel like I could live life out like he does — minus the public maiming and stuff.

Thank you for reading, or at least sharing the same admiration for this national treasure of a series as me. I didn't cover the entire franchise, just the stuff that I've gotten my hands on. If you'd like to seek out more excellent Sam and Max content, skim the links below! Thank you!

All character appearances and artistic/musical content © belong to their respective creators.
Sam and Max are created by Steve Purcell, and licensed currently under Skunkape Games.
Now playing: Livingston Taylor - Best Of Friends